The Times of India: Siridao chapel could have Jewish history: Historian

SIRIDAO: The quaint architecture of the Jesus of Nazareth chapel at Siridao has remained shrouded in obscurity, but a few are convinced the unusual dome-shaped structure holds a key to evidence of pre-Portuguese Christianity and a multicultural society in the area. 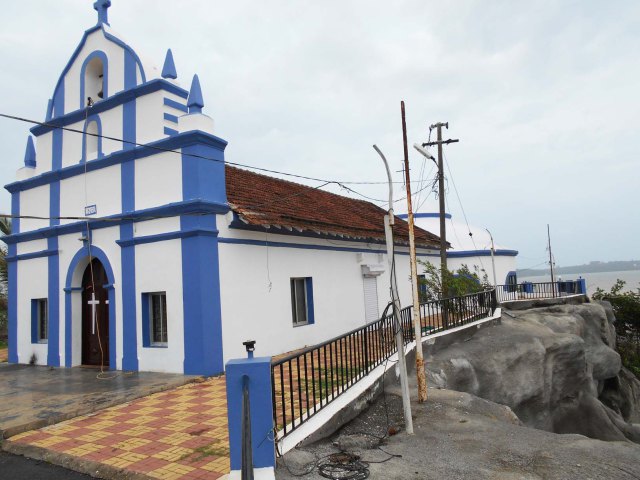 The chapel of Siridao has two different structures, and could have been an converted synagogue.

Perched on the edge of a hillock with a panoramic view of Zuari bay, the centuries-old chapel appears to be an extension of a smaller dome-shaped original. A circular platform on the floor behind the altar and a few other features resemble the setup of a Jewish synagogue. Says Fr Cosme Jose Costa, a historian and a priest from society of Pilar, “Around the circular pattern, there are several holes in the wall, which could have been receptacles for storing the scrolls of the Torah, the first five books of the Bible.”

The circular pulpit and secret passages under the dome have sparked off interest among researchers.

Cyril Fernandes, a freelance history researcher, who wants to rewrite history from a human rights context, was struck by the unusual architectural elements and travelled south for an appraisal of the Kochi synagogue.
“This design matches that of the chapel, but in Kochi the pulpit has ornate metal decoration around the pulpit,” he said. An opening in the pulpit in Siridao could be a gap to fix the table for reading the Torah. 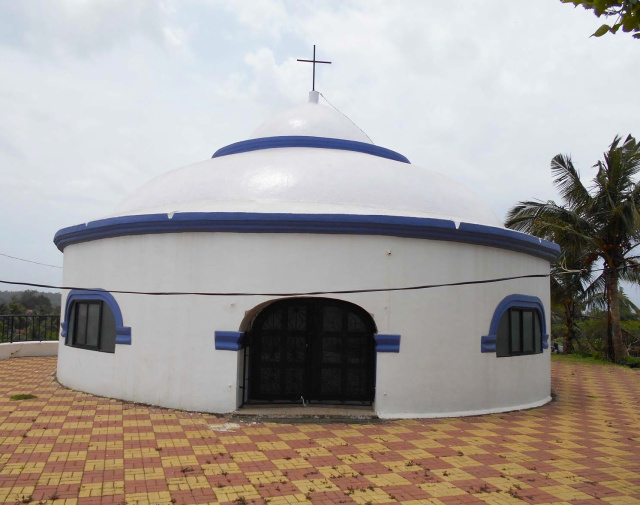 Very unlikely, made by the Roman Catholic Church.

Viewed from the rear, the dome-topped chapel presents a breath-taking view unlike any Catholic chapel or church, and the tell-tale contrast in the original of the dome and the new extension is evident. Heritage lovers would say the chapel is a true example of assimilation of the hoary past in the contemporary architecture. But existing evidence of history is being defaced out of ignorance and the ruthless march of time.

Siridao lies on the northern fringe of the ancient Gopakpattana port, which once covered coastal areas of Goa Velha and Agasaim. Ships from different parts of the world dropped anchor till a millennia ago at this teeming port. A huge wall of the port extended from Dandi in Agasaim to Kharosai in Goa Velha, but time and tide have obliterated almost all its vestiges.

Costa’s discovery of a seventh century St Thomas Cross with inscriptions in Pahlavi language at Dandi in Agasaim a few years back did help uncover the historicity and rich multicultural society of Gopakpattana. “Persian traders under the Sassanid dynasty used Pahlavi language and the finding established the link of Pahlavi Christians with Gopakpattana,” says Costa.

The historian has linked his inference to the report of Cosmas Indicoplesutes, an Alexandrian traveller who visited India in AD 522 and also referred to a Bishop of Persian origin in Kalyan, near Mumbai being put in charge of Christians on the western coast of India. As a settlement of Pahlavi Christians existed in the ancient port, much before the Portuguese era, researchers veer around to the possibility of a Jewish settlement in Siridao. “The architectural and archaeological remains in the village merit a deeper study than the neglect and defacement they are facing now,” says Fernandes.

A huge arch in the middle of a long wall near the chapel entrance has been defaced by the recent beautification. Three remarkable statues, a cave behind the chapel and some other remains also point to Siridao’s glorious past.

The village itself is now reduced to a deserted place due to large-scale migration. Many senior residents have either passed away or migrated to join their kin. “We are not aware or informed about our past by our elders,” Inacinho Marquis, a local resident says.

A few years back some books and documents were found in the chapel but villagers are not aware about the fate of the records.

The existence of Jews in Old Goa and along the west coast before the advent of the Portuguese has been well recorded by a few historians. A street in the former capital was called Rua dos Judeus or the street of the Jews. Fernandes showed the unique chapel architecture to Nissim Moses, a Bene Israeli who lived in India till recently. Moses later wrote in an article, “The Portuguese Jews arrived in India as traders probably well before the year 1500 when it was socially acceptable to be Jewish in Portugal.”

Hundreds of Jews living in Old Goa during the rule of Yusuf Adil Shah (1498-1510) are also believed to have contributed in building the former capital.

The Jewish presence may have been wiped off during the inquisition in Goa from 1560 to 1812. Scholars would need to dig deeper to find evidence of their settlements in Siridao. “The antiquity of the Siridao and Kochi pulpit needs to be studied by scholars in Jewish history and architecture,” says Fernandes.

Source: The Times of India

Born in Bergen, Norway in 1965
View all posts by ivarfjeld →
This entry was posted in Media reports. Bookmark the permalink.

1 Response to The Times of India: Siridao chapel could have Jewish history: Historian