How do we know who build this structure? 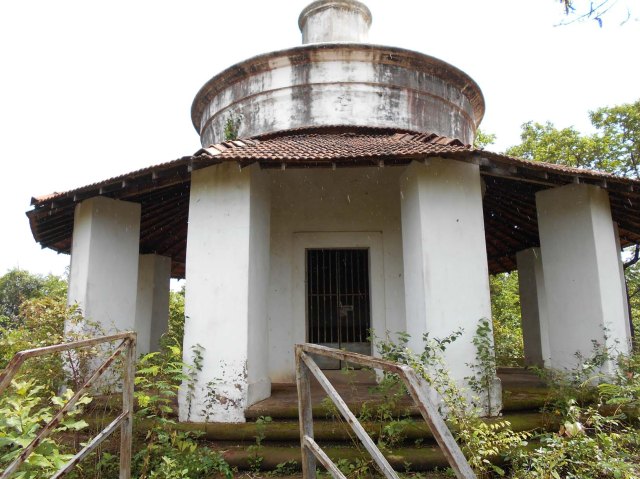 On a hilltop on Charao Island stands this structure.

This is what the Department of Archives and Archaeology, Government of Goa has recorded.

Chapel of St. Jeronimus, Madel Chodan on Chorao Island in Tiswadi. This Chapel is situated on the top of the hill at Madel-Chodan dedicated to St. Jerome. It is circular structure with a dome at the top with pillared verandah around and it was constructed in 16th century. There is a high stone platform in the northern end of this Chapel.
(end).

Was this originally a Catholic chapel?

There have been claims from some researchers into history, that this structure is a converted synagogue. It is difficult to find written sources on this structure, and not possible to acknowledge such claims.

We know that synagogues in Spain and Portuguese were converted into Roman Catholic shrines during the Inquisition. It is very likely this happened in Goa too. This kind of layout of a Catholic Chapel is surely not normal. And the inside space is very small. It looks too small to have worked as a synagogue. And there is no place on top of the hill for a Mikveh. No source of “living water”.  And what is the veranda for? It looks like, and could have been raised as a memorial over a rich Jew or Christian. There are no Hindu claim to this structure.

The settlement area around this “chapel” is full of traces of houses. I personally picked up what looked like Chinese porcelain from the ground.

The view is fantastic from this site. You overlook both the island of Divar, the Mandowi river and Old Goa. Most likely a settlement area made by rich merchants.  But why was the settlement abandoned?  Why is there not a living soul here today? Was this also in Jewish ownership, before the Inquisition? A lot of places in the surrounding area haven names that ends with “aim”, “lim” or “rim”. A PhD-study of a possible Hebrew origin is much wanted.

Another structure in this area, that do not seems to be of Portuguese Roman Catholic origin, is the The Chapel of Our Lady of Candelaria at Divar island. A new examination is needed.

It could have been a synagogue, or a ancient Nestorian shrine.

Born in Bergen, Norway in 1965
View all posts by ivarfjeld →
This entry was posted in Interesting sites. Bookmark the permalink.
Loading Comments...
%d bloggers like this: