Nahvind Times: The pilar that belongs to no one

In the midst of churches and cathedrals that stand sentinel in the church town of Old Goa, there is an old, long forgotten pillar not many know or care about. Here is the story of the Pelourinho Novo.

The ancient pillar have been hit several times, as it has been left not secured at an trafic island at Old Goa.

Though the beauty of our state is mesmerising, it is not the only crowning glory Goa has. Goa is rich with a visually appealing landscape and is even richer in term of historical value. The land of sea, sun and sand has an abundance of historical treasures in the form of traditions and monuments. Its large number of monuments is attributed to the fact that it has a diverse and rich history. Rulers from various dynasties across the nation and across the globe have stepped on Goan soil and left their mark in various ways. The most evident being the many monuments and historically significant sights spread across our tiny state. 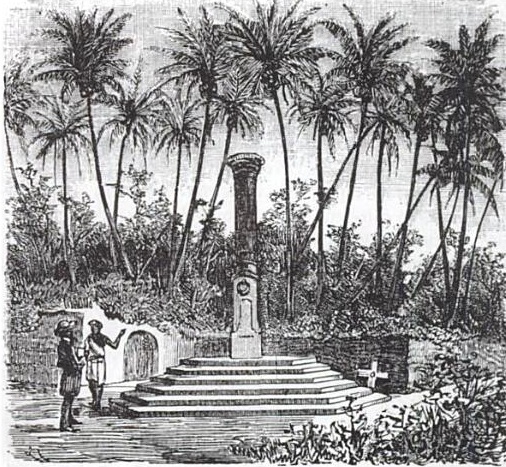 The pillar is likely to have been in use during the Inquisition at Goa.

Old Goa is a perfect example of the historical treasures Goa has. Among the many world heritage sites present at Old Goa, is a black basalt pillar called the Pelourinho Novo (new pillary), which is currently situated at a major junction on the Old Goa highway. But, unlike its other monumental counterparts, this pillar is not a protected monument; which means that neither the Archaeological Survey of India (ASI) nor the Directorate of Archives and Archaeology, Government of Goa have the official right over this monument. To understand this concept better, one must flip through the pages of history to when Goa was liberated.

But sadly just like the many other monuments in Goa, the Pelourinho Novo does not feature in either one of these lists. The pillar has a very debatable history. Although many regard it as the ‘Pillar of Inquisition’, the few accounts available of the inquisition in Goa do not mention anything about the pillar. So, it is still an uncertainty if the pillar had a link to the inquisition imposed in Goa.

The available accounts of the pillar’s history state it to be the centre of economic activity and social functioning. The pillar was said to be located elsewhere and was shifted later on due to congestion of the area. The original location of the pillar was called the Pelourinho Velho, now called the Gandhi circle. It was here where the ‘bazaar velho’ or the old market was located. During the day the bazaar was bustling with activities while at night it would be the area for selling stolen goods at nominal prices. This is why the place was also known as ‘Baratilha’ (a place where goods were being sold at very cheap cost).

The Pelourinho also functioned as a place for announcement of municipal decrees or who the next mayor would have been. Thus it was a centre for important activities and signified a symbol of state authority.

This pillar is referred to as ‘Hat Katro Khambo’ in Konkani, which roughly translates as a pillar where hands were cut. Sources say that the reason behind this name could have been because in the olden days, petty criminals were displayed and punished by cutting off one of their hands. It was used as an implement of civil justice – one landed up in the pillory for not paying one’s debts. The use of this pillar has not been mentioned in any of the accounts, yet it is said that the pillar may have been used during the inquisition.

Although the history and authority over the pillar may be debatable, the citizens of Old Goa regard it with a lot of importance and have tried to conserve its heritage. “The pillar is a part of our history and should be conserved by the concerned authority”, says MC, Shane Almeida, a resident of old Goa. The citizens of Old Goa opposed the shifting of the centuries old Pelourinho from the present site on the highway to Old Goa and suggested to construct a traffic island around it to conserve the structure.

The pillar is regarded with importance by the people of Old Goa and definitely needs a better system in place to look after its conservation. “The pillar should be preserved by the ASI or the Directorate of archives and Archaeology, since it holds a lot of historic relevance,” reckons history lecturer, Prajal Sakhardande.

The neglect of this heritage monument seems to have been supported by the local Roman Catholic Church, and the local political leaders, the local MLA and the sarpanch. All of them suggesting the pillar should be kept at a traffic island, at the bottom of a hilltop on the national highway.  Under are their statements recorded in a media-report in the Times of India, 4th of August 2008.

The traffic island is already badly damaged by trucks and busses. Now, its only a matter of time when this ancient pilar will be destroyed by a loaded truck that looses its brakes. 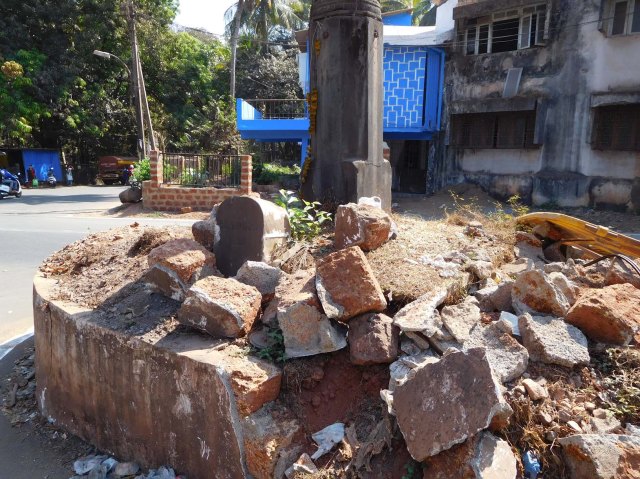 The Government of Goa and India must do more than this to protect its heritage monument.

Born in Bergen, Norway in 1965
View all posts by ivarfjeld →
This entry was posted in Interesting sites. Bookmark the permalink.
Loading Comments...
%d bloggers like this: